A downloadable game for Windows, macOS, and Linux

After joining a small club devoted to discussing the ups and downs of yuri in fiction, shy college student Mona finds herself a reluctant spectator of a clash between two titans. In one corner, the fiery and tempestuous Riley. In the other, the passionate and steadfast Hana. The two juggernauts of the yuri fandom collide over magical girls, idols, directorial framing, capitalism, target audience, and the military-industrial complex...? How the heck did we get there...? 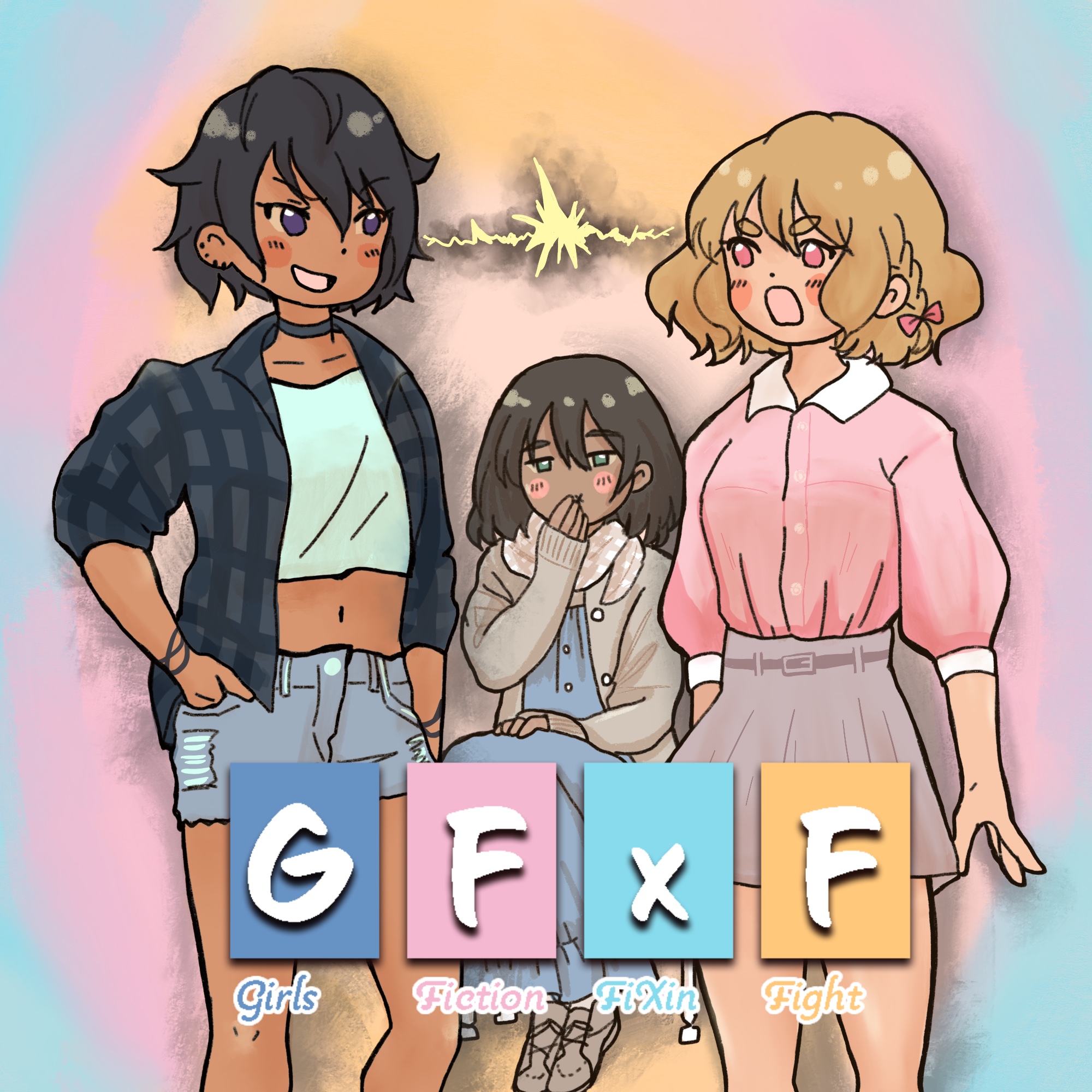 All this and more awaits in GFxF: Girls Fiction fiXin Fight! 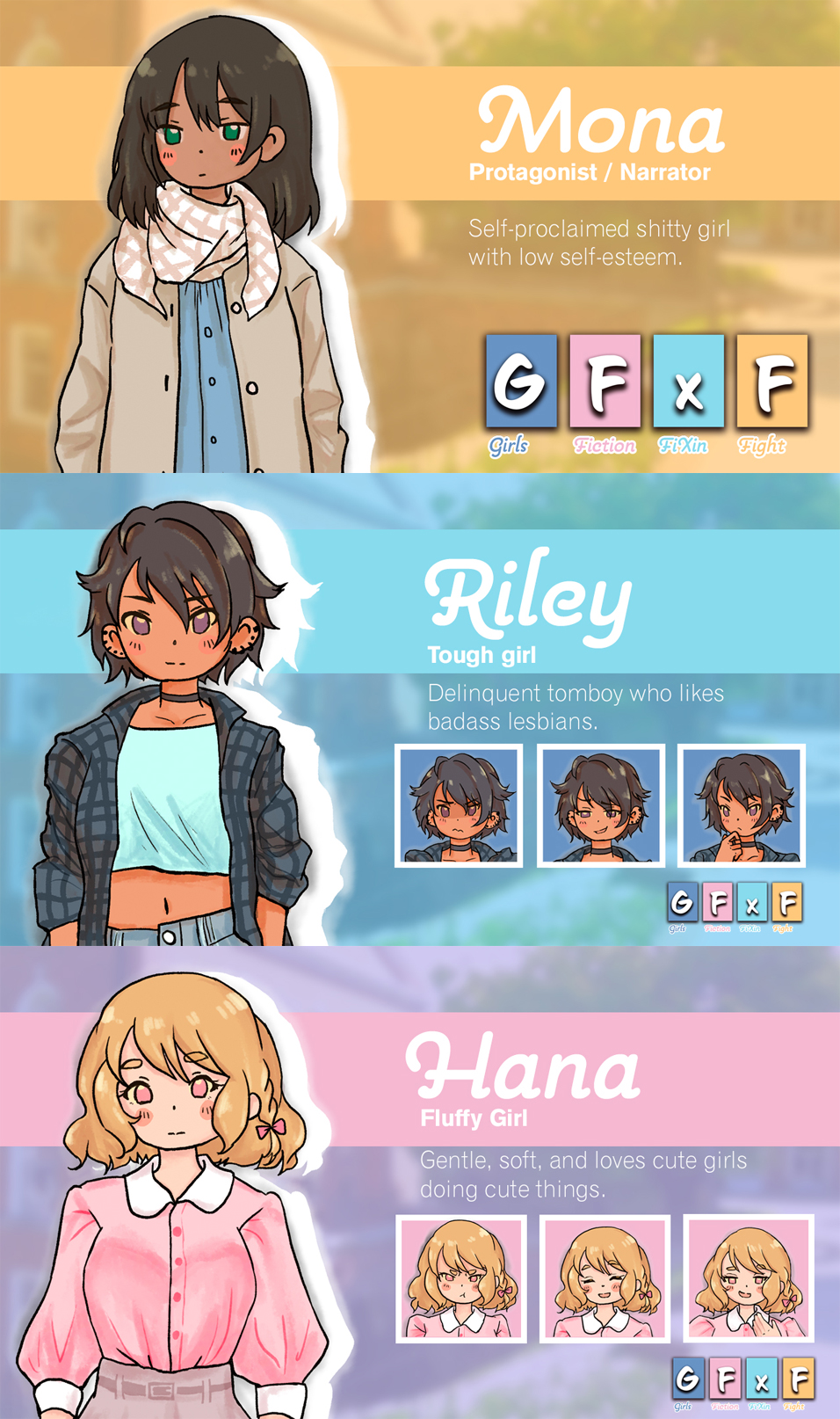 Content Warnings: GFxF is generally a lighthearted title but it does delve into anxiety, loneliness and social isolation. The game features discussion of sexual acts and sexualization, homophobia, abuse, as well as religion, politics and ethics.

Wow, talk about exceeding expectations! I wouldn't have thought a series of thought provoking essays about lesbian representation presented by two admittedly likable characters in a debate format would be able to believably culminate in a genuinely moving self actualization of a girl who had given up on life, finally able to see how to put one foot in front of the other again and move forward... but... here we are so??

my lesbian ass is happyyy

OMG I LOVED THIS GAME SO MUCH. all the endings were amazing. I related so much to Mona and the topics the GLAM discussed were so interesting!!! I hope that someday, I'll get my college romantic story, just like Mona!

I could tell within seconds this was gonna be my kinda thing. That premise totally speaks to me, there's not a soul that could get me to shut up when Yuri Opinions are involved.

Usually with short VNs like this I can't really feel the feelings, 'cus I'm very much a slow-burn kinda gal, but this was just the right length and with just the right amount of intensity and emotional depth that I definitely felt it.

Endings were all great. Three cheers for these three queers

Ahhh that was soo cute! I really, really loved this game. The characters were written realistically and the dialogue was amazing. I loved the discussion of fandom stuff as I don't personally have any space to talk about this. Seeing it in a game and discussed between two characters made me realize how much I don't consider when it comes to my media consumption. Anyway, really loved the romance, Mona was so relatable!

Thank you for making Mona-

hey this was so sweet! embarrassed to admit that i couldn't get all the references but let me tell you i got INTO that idol debate (especially when they started talking about lovelive that is my JAM) i absolutely loved the poly ending it just felt so right for the three of them to be together! this was such an enjoyable game thank you so much for making this >w< 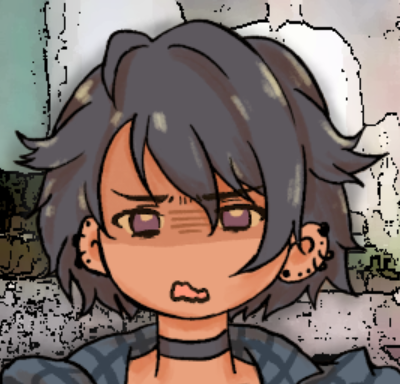 love this sprite of riley <3

how do you get the poly ending

you can also pick once agreeing with Riley, once with Hana, and then a third option, that's how I got it

Hey this was reaaaally really good ^^
I enjoyed a lot the writting and how them both idiots quarrel all day haha. Also, the 3rd final, I'm grateful for some poly visibility done as cute as that! Wish someday my lesbian ass can get to find my poly relationship t.t

Pd: Felt so related in so many levels with Mona :_( but I guess we just have to keep pushing as love ourselves ^^

how do you get the poly ending

Sorry saw this today. Tbh, I don't recall but it's kinda like not giving them what they want and acting equally with both

that was really fun to watch thank you for this visual novel :) comparing Tanya of the evil with Magical Girls made me laugh and the romance is adorable :)

I really enjoyed this! The writing is warm and funny, and Hana and Riley's bickering is very endearing as someone who's spent time in the anime discourse mines. I like Mona (sometimes despite herself) and this game's depiction of her social isolation was relatable

Y'all's writing in this is incredible and funny and rrreeally unexpected!  Great work!  I super love the art style, too!

Reply
One Dove Above2 years ago(+6)

This VN is simple and clean, fairly lengthy, and the characters are all unique. It’s clear that real world experiences inform the characters, so the dialogue feels honest and mature. A lot of thought went into both sides of the character's discussions of shoujo anime, it’s definitely written by someone who is strongly passionate and knowledgable about the subject matter.

One thing… The game really does feel like watching two people argue about anime, and unfortunately, that’s kind of to its detriment sometimes. If you’ve ever had to watch two people talk about the details of a show you haven’t seen, you’d know that it’s hard to stay interested or feel engaged with the conversation. It feels similarly when Riley and Hana argue, making a lot of thinly veiled references to real-world anime. I’m a fan of shoujo anime, so I’ve seen and recognize some of the shows they talk about, but for every reference I didn’t get, it felt like I was missing important context for their in-depth conversations.

For that reason, I found myself wondering how much longer it would be until the game would get back to the story. It’d be cool to see more interactivity in the game overall, or a B-plot that's more about Mona’s life outside of the club to break up the arguments and keep the pace moving forward.

With the knowledge that it was a 2 month game jam game, it’s quite impressive, and it seems like the creators had fun making it!

Well, anyway... This was something different, I'm not sure I've read a VN constructed in this way before. The contrast between the protagonist's deep struggles and the quirky fandom talk make it something of an emotional roller-coaster, and my mind kind of had problems to treat both parts as a cohesive whole. Same goes for the transition at the end and the romantic conclusions... The switch from the protagonist essentially being a creep and things going that far was a bit rapid, I think a more open conclusion would be easier to digest?

I feel the way you like to work with extremes is really shining when you construct dramatic stories but somewhat overwhelms the cuteness this VN seemed to be aiming for. That's my read at least, but to be clear, I still enjoyed it a lot and it left me with stuff to think about. :)

Yeah, I think if you wanted the story to have a natural pace it'd essentially need to be twice as long. Most of the new content would be after the "confession" and there'd be significant turmoil before it resolved.

The main thing is that the protagonist would as depicted probably be utterly destroyed if things didn't go well and writing that would make the story even heavier, so I'd probably need to flesh her out further by balancing her emotions and sort of moving her anxiety and loneliness to a back row, where it's less all-consuming and more gradual, that way she'd appear more resilient to disaster. Problem with that is she'd probably be less sympathetic and take more time to become so, in order for the climax to hit her more, which again would make it longer!

These are all kind of excuses for the story not being long or elaborate enough, but I can just blame the game jam for that, which is easier than blaming me playing videogames instead of writing 👍 Glad you enjoyed it anyway!

hi there, thank you so much for making this!! ♡ i stayed up past midnight playing this & couldn't sleep until i finished it & i was so happy i got the ending i was hoping for & enjoyed seeing what all the girls had to say !! c':

this was super adorable & the artstyle too, i loved seeing riley & hana parallel each other & mona's struggles, yet effort to try anyways...! i could relate a lot to mona & her struggles with herself & socialization, so when i got the ending of the second screenshot here, it made me happier than i could word, ; w ; they're all super cute !!

& as a friendly suggestion, the only thing i can think of is if players may need a content warning in the description, such as how some of how mona's, hana & riley's discussions dipped into heavy topics like mentions of sex/sexualization, sexual abuse, religion, homophobia & incest, just in case, as a few of more common things that some people may have negative experiences with, or lgbt+ minors may be uncomfortable with, i hope that is okay to mention...!

thank you again for making a game that brought me joy, comfort & hope that one day, i may have a sweet connection to hana & riley, as mona does & a sweet story overall, ; v ; ( & i'm so sorry this got so long !! )

Thanks so much for your response! I'm glad it meant so much to you. As to your advice you're quite right, I'll put in a content warning to the game description!

no worries, thank you again so much for making this wlw visual novel game, as well as reading my response & i appreciate your positive input to my thoughts !! ^^

I wish I could put into words how this game made me feel, but I really can't. It really helped me on a personal level since I can relate to some of the ways Mona is feeling, and it made me feel like things might workout for me one day too. It just gave me such a sense of comfort I can't really describe.

this is so lovely! i enjoyed all the endings, the meta discussions are really fun, and the art is really cute too!

I was not expecting a meta discussion on fiction and self esteem issue simulator in my yuri jam, but my god it was so good.

this was soooo cute! it had such a perfect blend of fluff, drama, and humor—every conversation between hana and riley was a treat, and the endings were so sweet!! easily one of my favorite yuri vns 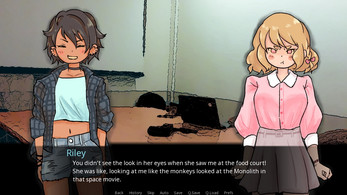 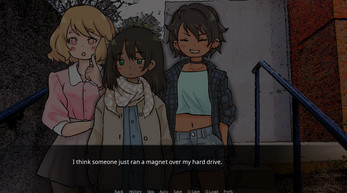 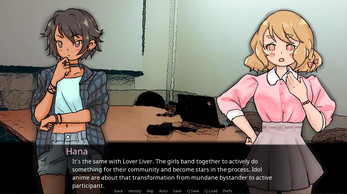 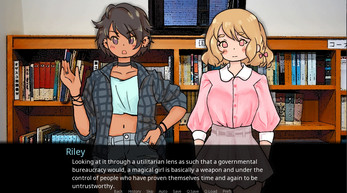 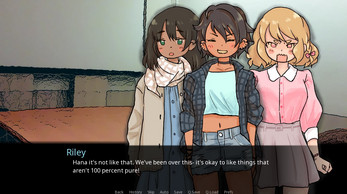 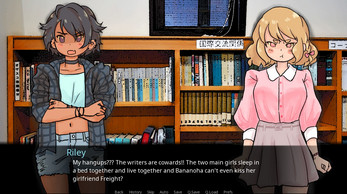